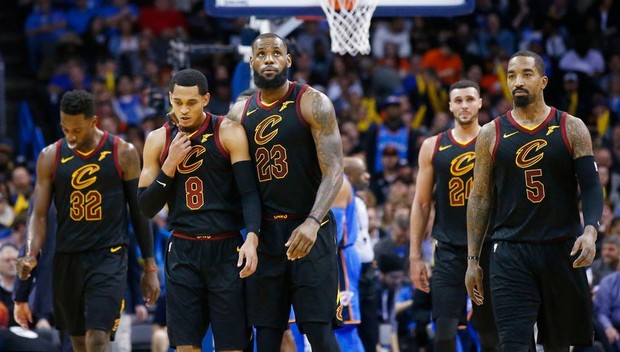 The Cleveland Cavaliers trail 0-2 in their best of seven ECF series with the Boston Celtics, and the internet is going crazy. Some have been labeling it as the end of LeBron’s reign on the NBA. Others have been labeling it as a signal of LeBron’s departure from an underperforming organization that is still up for sale by its owner. Regardless of the storyline that we choose to employ, one thing is for certain: we are rushing to conclusions. And why wouldn’t we? The NBA has strategically (in addition to giving players more rest) awarded the Cavs and Celtics with a four-day break from their series, further elevating the excitement and giving fans ample time to think long and hard about why the Cavs are down 0-2. All of this free time has made for rushed opinions and ridiculous theories that can only be confirmed on the court. Here are four key concepts that we have forgotten, or have chosen not to think about.

1. The Media Controls the Narrative Around the Cavs

The media has been nit-picking LeBron James from the get-go. Despite coming back from a lackluster game one performance with a 40-point triple double, analysts and former players are all getting on the King, saying that he needs to attack the low post more. There is no doubt that he should be utilizing his physicality to a higher degree, but at that point, we are simply grasping for straws. The fact of the matter is that LeBron’s supporting cast is garbage. Volume scorers like Rodney Hood and Jordan Clarkson are shrinking in the face of the playoffs, and nobody is talking about it. There is a simple solution to the Cavs’ woes against the hard-working Boston Celtics, and it revolves around team basketball.

As YouTuber MDJ explains in his video, “The Chamberlain Paradox“, team success is often undercut by an individual taking up a disproportionate amount of ball possession, precluding the rest of the team from getting in a rhythm, therefore resulting in worse team play. This is the argument that many analysts have taken as a reason to shoulder the blame on LeBron. However, this argument can quickly be diffused based on the talent on the Cavs’ roster. Kevin Love, Kyle Korver and JR Smith are certainly no Hal Greer, Chet Walker or Billy Cunningham (all HOFers in their own right). LeBron has to do what he does on a nightly basis, just for the Cavs to even be in the game. Don’t let the media’s focus on LeBron James distract you from the real issue that the Cavs deal with on a nightly basis: who is going to step up to help the King?

2. The Celtics Only Held Home Court

Many analysts have counted the Cavs out of the series already, as the Celtics have never lost a playoff series in which they started with a 2-0 lead. This statistic can be deceiving, as the NBA has constantly played around with the order in which they place home and away games in a seven-game series in the playoffs. In recent times, they have settled on what I believe to be the most viable solution; two home games to one team (the higher seed), followed by two home games to the other team, and then reverting to a home-away-home schedule in favor of the higher seed. This is the best solution because it minimizes the chances of creating too much or too little of an advantage for the home team, while also allowing for players to travel as little as possible to minimize unwarranted fatigue.

Teams are generally expected to hold on to home court advantage and win the games in their respective buildings, and as the higher seed, the Celtics merely achieved what they were supposed to achieve. It still remains to be seen whether they can steal a game in Cleveland, at which point it may be time to call it a series in favor of Boston. This very well may be the case, but we must not rush to conclusions in this regard, as LeBron has proven to us time and time again that it’s not over until it’s over.

3. Ty Lue Needs to Stop Trying to Appease All of his Players

Cavs head coach Tyronn Lue has amassed notoriety for his tendency to be a players’ coach. His coaching decisions are partially motivated by the way that it would make players feel. While this may very well be the right course of action in the regular season, Lue must be more cutthroat in the playoffs when it’s win or go home. I get a headache seeing players like JR Smith and Jeff Green getting heavy minutes in playoff situations where they simply don’t cut it.

We all know that Larry Nance Jr. has no prior playoff experience, but he’s the second most athletic player on the roster, so rewarding him with 15 total minutes in the first two games is unacceptable. Likewise, when the Cavs need a scoring spark from the rest of their roster, they need to rely more upon players who have proven that they can score in bunches once they get going. Rodney Hood was averaging 17PPG on the Utah Jazz before he was traded to the Cavs, but how can Lue expect to get this kind of scoring punch in 11 minutes of action in game two? Lastly, Kyle Korver has proven to be the second best scorer for the Cavs thus far in the series, so Lue needs to turn his 21MPG average in the first two games into at least 30 minutes every night for the rest of the series. 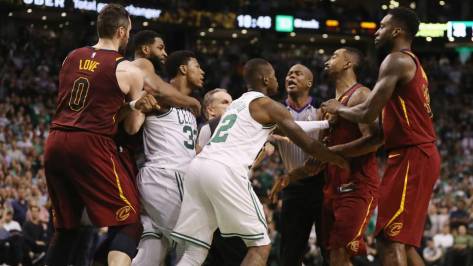 JR Smith, a shooting guard, has made two buckets and zero three-pointers in the past two games. He needs to be benched without question, as it is visibly clear that Lue has a special place in his heart for the veteran. Lue needs to begin making these kinds of tough decisions if he hopes to change the Cavs’ luck in the rest of the series.

4. Kevin Love is All-Star Caliber, & he has to Act Like it

Kevin Love has been okay in the first two games of the series. Okay doesn’t cut it when you’re the second best player on a team that you’re hoping to take to the championship. Kyrie Irving made the game so much easier for LeBron, because he was able to take over as the focal point at any time in the game, allowing the King to relax on offense and therefore put in more effort on defense. LeBron looks fatigued when he gets back on defense because of how much he has to do on the offensive end. Love needs to demand the ball and make things happen for himself, rather than operating as a cog in the system run by LeBron. Love’s success will translate to higher team success; players will see that somebody besides LeBron can get going, which will elevate everyone else’s confidence. Love needs to average at least 25PPG and 10RPG for the rest of the series if the Cavs hope to have a chance against an extremely hard-working Celtics team.