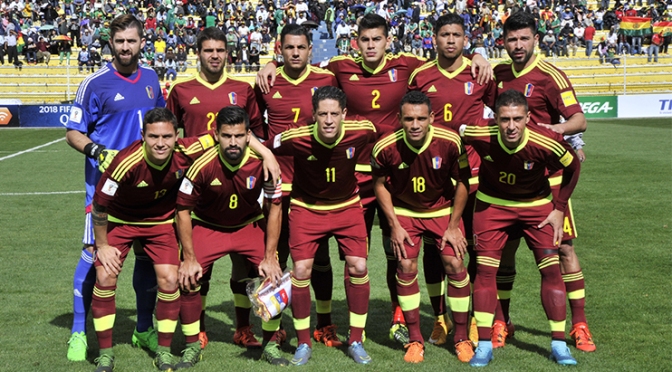 One of the most vivid memories of my childhood in Venezuela was undoubtedly the visible enthusiasm that I could see in the face of every Venezuelan, as the MLB’s opening day would approach. Nothing made any Venezuelan sports fan happier than seeing one of their own play on the enormous stage of professional baseball. Baseball was and has always been the national sport. This season’s Opening Day featured close to 80 Venezuelan baseball players on Major League rosters. Some of the most well known Venezuelan players in today’s game include Miguel Cabrera, Felix Hernandez, Carlos Gonzalez and Jose Altuve, to name a few.

To contrast, soccer in Venezuela has never been as important to the country as it has been to neighboring powerhouses like Brazil, Argentina, Chile and Colombia. However, the most popular sport in the world has been growing at a fast and steady rate since the late 1990s. In the early 2000s, under the coaching of Richard Páez, the Venezuelan national team began to make a name for themselves. Some key victories against well-known teams like Uruguay, Chile, Perú and Paraguay cemented the idea that Venezuela could compete with the best in South America. These triumphs not only gave the country something to feel proud about and look forward to but also marked the time in history that the team earned the nickname of La Vinotinto (translating to “the burgundy,” which reflects the color of the national uniform).

The first big Venezuelan soccer player, Juan Arango, began his career in his home country, but quickly found himself moving to more competitive leagues. He then spent over fifteen years playing in Mexico, Spain and Germany. Arango was the first Venezuelan player to play in the exponentially more intense European competition. After his departure, players were inspired and even more motivated to follow in his footsteps. More Venezuelans started getting recruited by other countries, creating a proud sense of nationalism, and attracting more locals to watch soccer. People closely followed the paths that were taken by the country’s players.

This was also the moment in time that I personally began to closely follow our national team. Even if it was simply a friendly match, it felt like the country was watching a final of the World Cup or the UEFA Champions League. Despite the fact that the country is going through one of the biggest financial crises and security problems of all time, the sense of pride that this sport has been able to create has revitalized Venezuelans all across the country.

Many other players such as West Brom striker Salomón Rondón and Juventus midfielder Tomás Rincón have followed in Arango’s footsteps. Rondón is only twenty-seven years of age and has managed to become one of the most prominent underrated strikers in the English Premier League. As a consistent performer and veteran on the national stage, Tomás Rincón is known to be one of the best midfielders that Venezuela has ever been able to produce.

Soccer in Venezuela is growing at a fast rate due to the fact that more and more players are striving to play abroad and eventually obtain opportunities to showcase their skills on larger stages. Even though the national team has never qualified for a World Cup, the country’s younger teams such as the U-20 team will be playing on the international stage in Korea Republic 2017. This shows the emerging young talent that is coming out of the country.

On the other hand, two of my favorite footballers that are continuously growing as players and seem to show a lot of promise are Josef Martínez and Adalberto Peñaranda. At only 23 years of age, Martínez plays as the main striker for new MLS team Atlanta United FC and has scored five goals in his first three matches for the young club. Martinez has great mobility and capacity, and has the scoring touch to distinguish himself from his peers. If he stays fit, he will definitely be one of the key players in the new generation of Venezuelan soccer.

19-year-old youngster Adalberto Peñaranda plays for Malaga FC on a loan from English club Watford. Peñaranda has also been showing a lot of promise despite his lack of experience at such a high level of soccer. He still has a lot to prove, but his ability to create in the open field and his ability to play off of other players on his team shows that he has the potential to eventually become a great player. If he can work on his ability to finish in front of goal, he will definitely be remembered as one of the greatest players to put on the Venezuelan national team uniform.

Every Venezuelan looks forward to and hopes for national improvement, economically and beyond. The crisis and insecurity have caused many aspects of the country to deteriorate, while also preventing other aspects to flourish. While this has been an issue for many years, Venezuelans continue to strive and keep their hopes up. Seeing La Vinotinto qualify to the FIFA World Cup would surely boost the morale of Venezuelans all across the country and the world. I don’t see this happening in the upcoming World Cup, but in eight years, we could very well be playing on the biggest stage in soccer, just as we did a couple of months ago in the World Baseball Classic.