Throughout the basketball world, those three words symbolized a remarkable transition in the sport. Kevin Durant, the most accomplished scorer in the league and arguably the second best player overall (after LeBron James), would be leaving the Oklahoma City Thunder. His new destination? The 73-9, back-to-back Western Conference Champion Golden State Warriors who had won the championship in 2015 and were up 3-1 in the NBA finals in 2016.

Naturally, many people were upset by this decision. First Take anchor and noted firebrand Stephen A. Smith described the decision as, “the weakest move I’ve ever seen from a superstar.” Charles Barkley, former NBA superstar and member of the 1992 “Dream Team” described the move as, “cheating.” Though many compared this to “The Decision”, where LeBron James left Cleveland to join forces with the Miami Heat, the situation was arguably worse. LeBron left a team that he had been carrying on his back for the first seven years of his career without any help in order to join forces with other stars in Dwyane Wade and Chris Bosh who had been doing the same with limited playoff success. In comparison, Kevin Durant left one of the top contenders in the Western Conference to join the team who they had lost to in the Western Conference Finals. Had Durant stayed, he could have likely continued his success with the team, possibly even beating the Warriors in the upcoming season. The basketball world was outraged and shocked.

Of course, everyone’s eyes fell on one man: OKC superstar point guard Russell Westbrook. Westbrook and Durant no doubt had a very complicated relationship: Durant was the better player, at least as per general media and fan consensus, but OKC was Russ’ team. In the locker room, it seemed as if Russ ran the show, and these tensions came out on the court. Both Durant and Westbrook required the ball in their hands to make plays, and as Westbrook came into his own, leading the league in scoring in the 2014-2015 season, the balance became difficult to maintain. Now, it was finally, without a doubt, Westbrook’s team.

From the beginning, there was significant doubt as to whether the Thunder could even make the playoffs. Westbrook, a rather irreverent, controversial player known for his questionable basketball IQ as well as his insane athletic gifts, was seen as a Wild Card. After all, when KD was injured in 2014-2015, the Thunder missed the playoffs with Westbrook at the helm (although it was due to a buzzer-beater three-pointer by Anthony Davis). However, from the beginning, it became clear that Westbrook was going to will this team to success, despite all of the obstacles in his way. Playing against an improved 76ers squad, Westbrook posted a stat-line of 32 points, 9 assists, and 12 rebounds en route to an OKC win. His statline the next game? 51/10/13, beating the Phoenix Suns and recording his first triple-double. The game after that? 33 points, 16 assists, 12 boards.

Over the season, Russ has continued his excellence, and is currently posting season averages of 30.8/10.2/10.6, which is a ridiculous stat-line by any standard. The man is averaging a triple-double and carrying an objectively bad team with limited options to the seventh seed in the competitive Western Conference, while being 2.5 games away from the fourth seed. Without a doubt, he’s certainly my choice for the Most Valuable Player Award this year. And it’s not even close.

Of course, there’s fairly rational criticism of Russell Westbrook, and plenty of arguments against making him the MVP. His usage rate, around 42%, is historically high, leading to his abnormally high numbers. His TS% (true shooting percentage) is 54%, which reflects his poor-shot making decision. In terms of three-point shooting, Westbrook is shooting barely above 30%, yet launching six three-pointers a game. His turnover average of 5.5 a game is astronomically high, and reflects his general inefficiency.

There are also other great performers in the league contending to win the award. Kevin Durant, Russ’ former teammate and current rival, is playing on likely the team with the best record in the league, having a career year on defense and rebounding while shooting at a higher percentage than ever before. Kawhi Leonard, the Spurs young, mellow superstar, has been playing as incredibly as expected, carrying an aging Spurs team to currently the second best record in the Western Conference. LeBron James, who will almost certainly without a doubt go down as one of the top 3 greatest basketball players of all time, is continuing his excellent play on the number one team in the Eastern Conference. Though his numbers reflect his generally less intense play in the regular season, he continues to show the league why he is still its best player.

And finally, James Harden. Harden, much like Westbrook, has been much aligned for his basketball IQ, and in particular his defense. However, under new coach Mike D’Antoni, Harden has thrived in a new system with a team built with the floor spacing and shooters that he needs. Harden’s been putting up historic numbers as well, leading the league in assists with a much higher TS and less usage. Most importantly, Harden’s Rockets are third in the Western Conference, having won more games against the Thunder as well as leading the Thunder in the season series 2-1. He’s currently the consensus mid-season pick for MVP.

Why It Doesn’t Matter

All of the aforementioned points are true. But they’re flawed when discussing the role of MVP. Despite all of this, the award still belongs to the Thunder PG.

In terms of Westbrook’s statistics, his usage rate is historic, like his turnover rate. But this is where the eye test needs to be applied. The Thunder offense revolves around Westbrook not just because he has the ball in his hands, but because there are very few true creators on the team. SG Victor Oladipo was ball dominant on a bad Orlando Magic team and is often unable to create shots with the Thunder, while big men Steven Adams and Enes Kanter are highly reliant on working with Westbrook to get the ball in their hands. Newcomers Alex Abrines and Domantas Sabonis have been playing up to expectations, but nothing more than what’s expected of young players in the league. Westbrook’s three-point shooting is subpar, but if he doesn’t at least attempt to shoot the ball, defenders can simply clog the lane and take away the Thunder’s biggest offensive threat: driving the lane. It’s also difficult to be expected to take smart shots when no one on the offense can score at all. It’s hard for Donovan to implement a legitimate offense with the arsenal of players he has, and it forces Russ’ hand to take over the game, for better or for worse. But generally, it’s for the better.

Speaking of statistics: averaging a triple double is a ridiculous accomplishment, done only once in history by none other than Oscar Robertson, widely considered one the best players in NBA history. It’s an accomplishment that deserves to be rewarded-just like Steph’s 402 three pointers last year. Such a unique, multidimensional, versatile accomplishment demonstrates the value of Russ.

Most importantly, Russ deserves MVP because he is doing more for his team than anyone else is currently doing for theirs or can do in general. Looking at the other four possible contenders, it becomes so clear why what Russ is doing is unique. In the case of Kawhi Leonard, Gregg Popovich is so good of a coach that it simply doesn’t matter who he has, the Spurs will likely win 50+ games anyway. As great as Kawhi is, the Spurs would likely find a way to win without him. In regards to Kevin Durant, if he was off the Warriors, they would still find a way behind Steph Curry, Klay Thompson, and Draymond Green to win 60+ games as a result of their impeccable shooting, ball movement, and coaching. While LeBron is the best player in the world without any doubt, the Cavaliers still have two highly skilled all-star caliber players in Kyrie Irving and Kevin Love. It also doesn’t help that LeBron very clearly “coasts” during the regular season, in order to save stamina and energy for the playoffs as a result of aging. Bringing it to the consensus choice, James Harden, as great as he’s been, he’s been benefiting from a fantastic system run by former Suns, Knicks, and Lakers coach Mike D’Antoni, who made superstars out of Steve Nash, Shawn Marion, and Amar’e Stoudemire. Plus, taking Harden off the Rockets leaves them with enough talent, shooting, and defense to still compete in the West.

But take Russell Westbrook off the Thunder, and they have nothing. They wouldn’t be a lottery team, and they would certainly miss the playoffs. Without a legitimate playmaker or consistent scoring threat, the Thunder would struggle against any skilled opponent. Despite the drama that has happened this past offseason and despite the media pressure on OKC, Russ has excelled and carried the team on his back. There’s a reason why the players and the media voted for him over anyone else to start the all-star game: he is doing something that almost no one else in the league can do; Westbrook is carrying a very mediocre team to the playoffs, and with his explosive abilities, they possibly even the chance to go deep into the playoffs and upset some of the better teams. 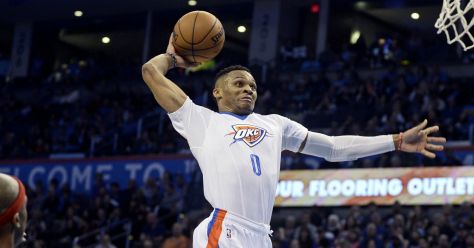 As far as I’m concerned, the Most Valuable Player Award is not the “Best Player in the League of Award.” Since around 2008/2009, that’s been LeBron James. But it also isn’t the “give it to the best player on the best team” award. James Harden has been having a historic year, but his relative advantage to Westbrook is based on team success that he has plenty of help creating, as opposed to Russ having to do it alone. Don’t let me be misunderstood, Harden isn’t a bad MVP candidate. Should he win, I’d happily accept it. But no one, and I repeat no one, has been more relevant, more important, and more valuable to his team’s success than Russ. If we go by what the award actually stands for, there’s one man who stands above all else.

And that man is Russell Westbrook.