Sunday night’s fog-filled Super Bowl rematch doubled as the Patriots’ best win of the season. Most importantly, the defense was able to shut down the Falcons, a team with a lot of talent on the offensive side of the ball. That being said, this was far from a statement win. The 3-2 Falcons have been sputtering after winning three in a row to begin the season. In week five, Atlanta blew a 17-0 halftime lead at home to the Miami Dolphins, who outscored them 20-0 in the second half. Given the way that the Falcons played on Sunday, I have a hard time giving the Patriots too much credit. It was a good win because the Falcons are a good team on paper, and the Patriots defense has struggled greatly up to this point, but they will have to play just as well against far better competition if the Patriots have true Super Bowl aspirations.

There is no doubt that Butler’s play this season has been impacted by the big offseason acquisition of cornerback Stephon Gilmore. After the undrafted Super Bowl XLIX hero played himself into being one of the top cornerbacks in NFL, it must have shaken his confidence to see $65 million given to a Buffalo Bill. Cris Collinsworth and Al Michaels acknowledged this in the broadcast booth during Sunday night’s game as matter of fact, despite being mere speculation up to this point in the season. It comes as no coincidence that Butler has played much better in the two weeks that Gilmore has missed with a concussion. On Sunday, he was very effective in man coverage, breaking up a pass in the end zone on third and goal early on in the fourth quarter, and recording six tackles including a big hit in the backfield to break up a Tevin Coleman rush. Butler’s play has been encouraging for two straight weeks, and hopefully this trend continues as Stephon Gilmore likely makes his return to the lineup this Sunday.

The Patriots offense was extremely effective on third down on Sunday, converting seven of thirteen attempts. Third down efficiency was one of my biggest concerns following the Edelman injury in the preseason. Thus far, Brady and the offense have proven me wrong, converting on 45.65% of their third down attempts, good for third best in the league. While converting on third down has been an issue at times this season (5-15 against the Chiefs in week one and 4-12 against the Buccaneers in week five), they have been effective for most of the season and especially in the last few weeks. Brady and his group of receivers have really stepped it up on third down. Brady’s statistics in situations of third and six or more have been best that they have been in the post-Garoppolo era (since 2014). He currently has a 65.1% completion percentage and a 124.0 quarterback rating on third and long. The offense has truly stepped it up on third down to help mitigate Julian Edelman.

The offensive line has played well for a second straight week, allowing two sacks for just eight yards and giving the Patriots the opportunity to run the ball effectively. On Sunday, New England rushers combined for 162 yards, the most all season, on an average of 4.5 yards per rush. The running game has been indicative of the improvement in offensive line play, as the Patriots have rushed for at least 100 yards in the last three games. This only happened once last year, excluding the four games that Brady missed due to suspension, and it was in the last three games of the season when the Patriots may have been looking to take some heat off of their then-39 year old quarterback. It is also not a coincidence that in the three weeks, Dion Lewis has been given a larger role and has emerged as the lead back, for now. Lewis has the capacity to be electric, and has the ability to jumpstart the offense. Last year’s AFC divisional game against Houston could have been a much different game if it weren’t for Lewis’ kickoff return touchdown. On a team that is so reliant on the passing attack, Lewis should remain the Patriots’ primary back, unless he needs to be preserved to avoid injury.

The defense has shown improvement over the course of the last two weeks, as Gilmore has been sitting out with a concussion. Butler’s aforementioned recent success is almost certainly a product of Gilmore missing time. It is never a good sign when commentators are debating starting Johnson Bademosi over a healthy Stephon Gilmore. However, Gilmore should be in the starting lineup this Sunday, and should be in man coverage against Tyrell Williams, the bigger receiver in the Chargers’ group of wideouts.

The defense has had some uncharacteristic issues so far this season. They are currently last in yards allowed per game and yards per play. While it is not surprising that the Patriots are giving up a lot of yards, they typically do not allow big plays. Even though New England finished 25th in yards allowed in 2016, they were tied for eighth in yards per play. Similarly to allowing big plays, the Patriots have failed to contain quarterbacks this year, unlike their history of handily being able to do so. On Sunday, Matt Ryan rushed for 37 yards on three attempts. Allowing rushing first downs to Matt Ryan is extremely problematic for a defense that hangs its hat on discipline. The amount of big plays and lack of containing lead me to question the players’ reaction to coaching on the defensive side of the ball. These are not issues of talent, but rather issues of executing defensive schemes coached up by Belichick and defensive coordinator Matt Patricia. If the defense is unable to do that, there are bigger issues than just Stephon Gilmore and problems in coverage at hand.

Next Week: Home vs. Chargers

The Chargers have won three straight after beginning the season 0-4. Three of their four losses have been by three or fewer points, and two were lost on missed last second field goals. On defense, they have the formula to beat the Patriots; they are able to pressure the quarterback without blitzing. The Chargers are currently tied for fourth in the NFL in sacks with 23. Defensive ends Joey Bosa and Melvin Ingram both rank in the top six in sacks with 7.5 and 8.5 respectively. This will be a big game for the offensive line, especially for center David Andrews and guards Joe Thuney and Shaq Mason. If the Chargers are able to get pressure up front, it will be a long and painful game for Tom Brady. 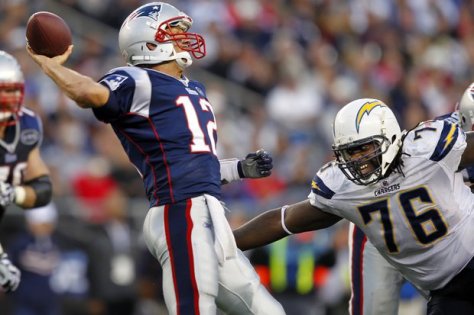