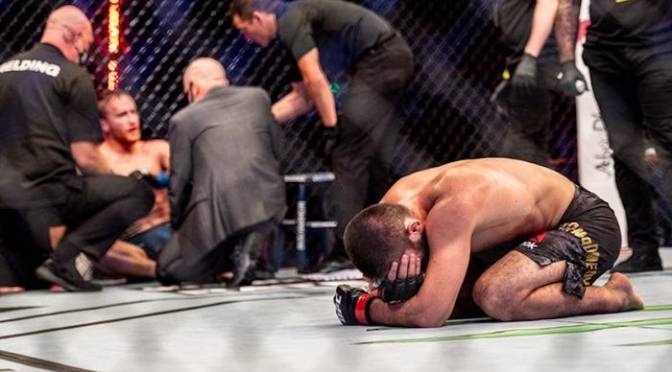 When we get hooked on a TV series, we just want more content. Production houses are happy to oblige – building the universe out means more money in their pockets. We occasionally fall into a trap of milking a story for too long, thus impacting the overall legacy. Both as a fan and as a creator, it’s so hard to know when it’s time to call it quits.

A flawless MMA record of 29-0, summed up with multiple Sambo world titles, multiple Grappling No-Gi world titles (at welterweight) a European Pankration title and a European Hand-To-Hand Combat title solidify him as one of the greatest combat sports athletes of all time. And he’s still 32.

In reality, Khabib has been retired for a while now. He admitted to Megan Olivi yesterday that he has truly been retired for months, and that Dana White’s understandable efforts to coax him back into the octagon have been for naught. As we look forward, a handful of high-level contenders remain to scrap for the strap, all of whom stand leagues below the Dagestani legend in both legacy and head-to-head success.

A matchup between Michael Chandler and Charles Oliveira seems uncomfortable without a certain lightweight from Louisiana in the mix, but the rest of the contenders were dominated by the man vacating the title. Dustin Poirier can get his chance again, but the matchup signals a clear homage to Khabib’s dominance.

After only losing two rounds on any judges’ scorecards, the man feels like he has nothing left to prove. We, as fans, call out for him to continue his legacy – at least until he hits 30-0 – but we must respect a decision borne from the tragic passing of his father and the wishes of his mother. This writer knows that it’s hard to say “no” to a Russian mother.

The reality is that he truly has nothing left to prove. Let’s do the math. If Khabib were to hypothetically fight again, he would have done so against one of the following fighters:

At the end of the day, Khabib leaves the division in good hands. The lightweight division has never been deeper. Established contenders like Oliveira, Poirier, McGregor, Chandler and Justin Gaethje provide several fitting championship suitors.

Resilient veterans like Hooker, Ferguson, Rafael Dos Anjos, Paul Felder and Kevin Lee provide several high level fighters looking to re-insert themselves into the picture. Up-and-coming competitors like Beneil Dariush and Islam Makachev could easily find themselves in the top five after their next respective fights. Khabib leaves arguably the most stacked division in the UFC.

A man who has been fighting smashing his entire life doesn’t need to fight smash any longer, and I think that’s kind of beautiful.