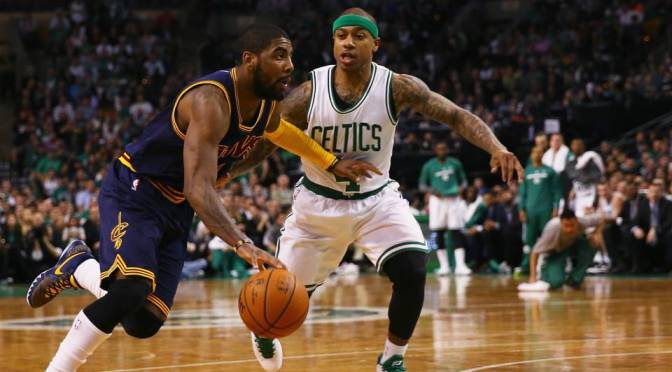 The race to lose to the Golden State Warriors in the NBA Finals just got a lot more interesting. The Association was shaken up Tuesday night as a blockbuster trade saw Kyrie Irving traded to the Boston Celtics in exchange for Isaiah Thomas, Jae Crowder, Ante Zizic, and next year’s first round draft pick acquired in the Brooklyn trade. This is a deal with a lot of moving parts, so here is a breakdown of each piece involved (from a Boston perspective, off course).

I’m not going to say I told you so (but see my earlier article “Why the Celtics Should Explore Trading Isaiah Thomas”). Coming off of a season in which he was the third leading scorer in the NBA, Thomas’ stock has never been higher. Despite his recent success, I have serious questions as to whether or not a 5’9” player can be a superstar, especially given the fact that much of Thomas’ game relies on his ability to get to the basket. Another facet to keep an eye on moving forward will be Thomas’ hip injury that forced him out of the Eastern Conference Finals and is forcing the Cavs to re-think the trade. While I believe that Thomas would have continued to play if the series had been more competitive, reports Tuesday prior to the trade were that Isaiah would be re-evaluated prior to training camp. I do not believe that his hip will be an issue, but as a small guard who relies on quickness to get to the hoop, any lingering issue with that hip could significantly impact Thomas’ 2017-2018 season.

To me, moving Thomas was more about his contract than anything else. He has made it apparent that he is expecting a max deal at the end of this season, telling the team that they should expect to “backup the Brink’s truck” after this season. I had serious doubts as to whether or not his one-and-a-half seasons of success in the league deserves a max contract. It is not a question of whether or not he will get the max. The max contract has become essentially a formality for any good player in the league. However, in a time of rebuilding for the Celtics, I do not want to commit max money over five years to anyone who is not an established superstar. Kyrie Irving is exactly that – an established superstar who deserves that deal – and I certainly do not mind sending Thomas in exchange.

Goodbye. See you later. I could not care less. For some reason, Celtics fans have fallen in love with Crowder as a tough and gritty player who is an example of the Celtics way. His hard-nosed play combined with his team-friendly contract (Crowder is signed until 2020 for about seven million dollars each year) has created the illusion that his loss will impact the team. First of all, recent moves made by the Celtics have made Jae Crowder obsolete. If he was still on the team, he would be the third option at small forward. The signing of Gordon Hayward and the drafting of Jayson Tatum has solidified the position for Boston. While Brad Stevens likes to play “positionless basketball,” Crowder is too small to play the four and too raw to play the two. If anything, moving Crowder should leave more room for Tatum’s development. While his toughness on the defensive end is something that this Celtics team will not have at the small forward position, the addition of Marcus Morris at power forward adds a gritty element that Boston did not find in Amir Johnson, while increasing offensive production.

It is difficult to make an assessment of a player we have yet to see in the NBA. However, a lot of basketball analysts significantly value the 20 year-old from Croatia. Many believed that he would potentially find his way into the starting line-up, as Al Horford would prefer to play the four rather than the five, and the seven-footer would add much-needed size in the paint. That being said, the Celtics have seen their fair share of seven-footers who cannot rebound (Kelly Olynyk and Tyler Zeller) and Zizic did not have a very good showing during Summer League action. I am more than happy to give up Zizic, a complete unknown, for a top ten player in the NBA, despite how highly regarded he is by some Celtics analysts.

This is the worst part of the trade. I am far more hesitant to give up the pick than I am to give up Isaiah Thomas. Isaiah was a good player for the past few years when the Celtics did not have a chance of winning a title. Those Brooklyn picks are for when Golden State’s dominance runs its course and the rest of the league can become competitive again. However, given reports that Cleveland was asking for this year’s first round pick (Jayson Tatum) in place of the pick, I do not mind parting with that last Nets pick. Boston was able to keep a shot at a high pick by trading down from first overall to third last year. In return, they received either the Lakers’ 2018 first round pick if it is number two through five or the Kings’ 2019 pick if it is number two through five. With the potential to remain at the top of the draft, it is not as detrimental it would first appear to give up that Brooklyn pick. Additionally, for the first time in a few years, there is some uncertainty as to where that pick will land. After an abysmal 20-62 season, the Nets revamped their roster with D’Angelo Russell, Timofey Mozgov, DeMarre Carroll and Allen Crabbe poised for major minutes. This is not to say that the Nets have a good roster, and certainly not what some Celtics fans now believe (that the Nets might make the playoffs). But with an improving roster and no need to tank, there is a chance that the pick falls outside of the top five.

The pick could be incredibly important this season for Cleveland amidst rumors of LeBron leaving in free agency. They could flip it at the deadline for a player like DeMarcus Cousins to help encourage their star to stay. A supporting cast of Thomas, Cousins and Love may be enough to entice LeBron to stay. If he chooses to move to Los Angeles and join Lonzo Ball and a potential addition of hometown kid Paul George on the Lakers, Cleveland has a piece to potentially start over in his absence. In order to make a deal, they required a young player from Boston’s core – either Jaylen Brown or Jayson Tatum, or that Nets pick. Brown is highly regarded by the Celtics organization and will likely be the starting shooting guard this season, with the ability to play at the forward spots as well. Tatum flashed moments of greatness in Summer League action, showing offensive ability and a good-looking shot. It took a young piece to get the deal done, and out of the three on the table, Boston chose the right one to give up.

The Celtics just got younger, taller, and better and point guard. Kyrie is a similar player to Isaiah, only with more height, better defense (still bad defense, but better), and a better ability to get to the basket. He is an established NBA superstar, while Thomas had a few good seasons and one great one. I feel far more comfortable giving Kyrie a max contract when his time comes, and I believe that Boston acquired him with the expectation that he will re-sign. Reports after the deal said that Irving was excited to be in Boston and would work on an extension or on re-signing. It is difficult to not get excited as a Celtics fan for an established NBA superstar and a top-ten player in the league. 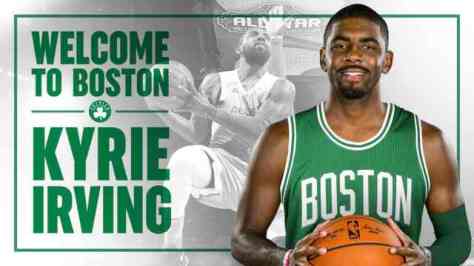 From the perspective of a Celtics fan, I love the trade. That is not to say that it was a steal; the deal required giving up some real assets. There is a genuine concern that Boston overpaid for a player who wanted out of Cleveland. That being said, given the player they received, I do not mind giving up any of the assets involved, and Irving is under contract for the next couple of years. For the last year, I have been pleading that the Celtics organization does not give Thomas a max contract. The deal tells me that they have the same opinion, and see no issues with moving him in the last year of his contract. Jae Crowder is more than overrated, and moving him will actually help the Celtics in the long term. The signing of Gordon Hayward and the drafting of Jayson Tatum forced Crowder out of a role, and moving Crowder will allow Tatum more space to grow. Although his grit and defense be missed, a replacement can be found in Marcus Morris who provides that very same intensity. Parting with that first round pick is tough, especially in a year of what is supposed to another loaded draft. But there is no way of knowing for sure what that asset will be, and the Celtics have already acquired two players for the future. It was time for this franchise to make a big move, and they did just that.