Everyone knows the name Kevin Durant by now. He is the starting small forward for the NBA’s Golden State Warriors, an eight-time NBA all-star, and a four-time NBA scoring champion. He won the 2013-2014 regular season MVP and the 2016-2017 NBA Finals MVP on the way to an NBA championship. And at the end of the 2017-2018 NBA season, he will be a two-time NBA regular season MVP. 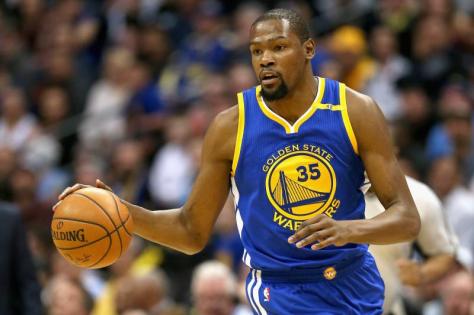 If Kevin Durant did not suffer a frightening knee sprain in February that caused him to miss 19 games, he would have given Russell Westbrook a serious run for the 2017 MVP. Here are the five reasons why Kevin Durant will complete the job in 2018:

The primary argument many sports analysts give for why LeBron James does not win MVP every year even though he is clearly the best player in the world, is that voters are tired of giving him the award every year. At one point, that was true. From 2008-2013, LeBron James won the MVP award four out of five years, and the only year in which he lost the award (2010-2011 to PG Derrick Rose), was his first year with the Miami Heat in which he was adjusting to playing with new teammates.

But that was years ago. The voters have not given LeBron James the MVP award since 2013. It’s been four years since LeBron received an MVP award, so voters experiencing fatigue of giving LeBron the award every year is no longer a valid argument.

The kind of fatigue that will prevent LeBron from winning the 2018 MVP is the kind that affects 32-year-old basketball players who play nearly 100 games each year by virtue of advancing to seven straight NBA finals. In the past few years with Cleveland, LeBron has taken resting his body more seriously and frequently misses games during the regular season. That will continue in 2018 as LeBron is getting older and there’s nothing more left for him to accomplish in the regular season. And voters certainly count the number of games a player misses during MVP voting.

Even if PG Isaiah Thomas’ hip acts up and LeBron is forced to carry the Cavaliers, the East has become so weak that the Cavs will easily still make the playoffs. And that’s all LeBron cares about at this point. The past two years, LeBron has shown his fatigue or even disdain for the MVP award. In 2016 when Curry won the award, LeBron congratulated Curry, but commented “most valuable” is different from “best” player. This year, LeBron was a little agitated at finishing fourth in MVP voting and commented that he does not care about who the media votes as the MVP because, “this league knows what I bring to the table.” LeBron knows that he’s the real MVP every single year and at this point, he’s done caring about who the voters choose.

For all of these reasons, LeBron James will not win the 2018 MVP.

Russell Westbrook will Struggle for an Encore

The main reason why it is so hard to win back to back MVP awards is that a player has to top what they did the last year to still impress voters. No one will have it harder in recent memory than Russell Westbrook because of just one number: 42. That is the number of triple doubles that Russell Westbrook amassed last season, beating Oscar Robertson’s 55-year-old record. That accomplishment on its own warrants an MVP and Westbrook certainly earned his award last season. But this year, voters will still be counting Westbrook’s triple doubles. And if he reaches anything short of 42, voters will easily be able to declare that Westbrook didn’t perform as well as his MVP season deny him a repeat.

Westbrook is likely to struggle to repeat his stats from last season because of the addition of Paul George. George will make the Thunder a much better team, but he’ll take away touches and points from Westbrook, and the voters will take away his MVP award.

In similar fashion, PG Chris Paul has arrived in Houston and he is bound to take away touches and points away from one of Kevin Durant’s main competitors, James Harden. Harden averaged 29.1 points a game last season and even scarier is that he has increased his average assists per game and points per game in each of the past three seasons. This streak will come to an end in 2018 due to the addition of PG Chris Paul taking away just enough of Harden’s touches and points. Harden will definitely still be a top MVP contender in 2018 because he’s just too good of a scorer to be fully slowed down. But sadly, Kevin Durant will keep James Harden waiting yet another year to receive his first NBA MVP award.

The 2017-2018 NBA schedule was unveiled on Monday and guess which team has the most nationally televised games? You guessed correctly, the Golden State Warriors. Golden State will be playing on national TV 31 times this year, the most of any NBA team, and will play in premiere matchups against the Cleveland Cavaliers on Christmas and Martin Luther King Jr. Day. Durant will be dominating on our televisions over and over again, and he will create a national story about his performance in 2018, giving the voters plenty of reasons to vote for Durant.

Best Player on the Best Team

The rest of the NBA can do nothing to stop Durant. To start, there are few basketball players in the world who can even hope to defend a player with the size, speed and shooting range of Kevin Durant. And if you double him? Stephen Curry and Klay Thompson will make you pay with a wide open three-pointer.

Even though Durant accomplished his goal of winning an NBA championship, he clearly still has a chip on his shoulder. He has not at all acted content with his one championship; the man still has something to prove. Despite being a first-time NBA champion, Durant handled June’s accomplishments with a surprising amount of calm. His emotions never got too high after the NBA title win, and that shows you that he expected to win, and expects to win more. Durant has also had multiple twitter arguments with fans this summer and has taken offense to negative stories about him. He is clearly still motivated and out to prove his haters wrong. 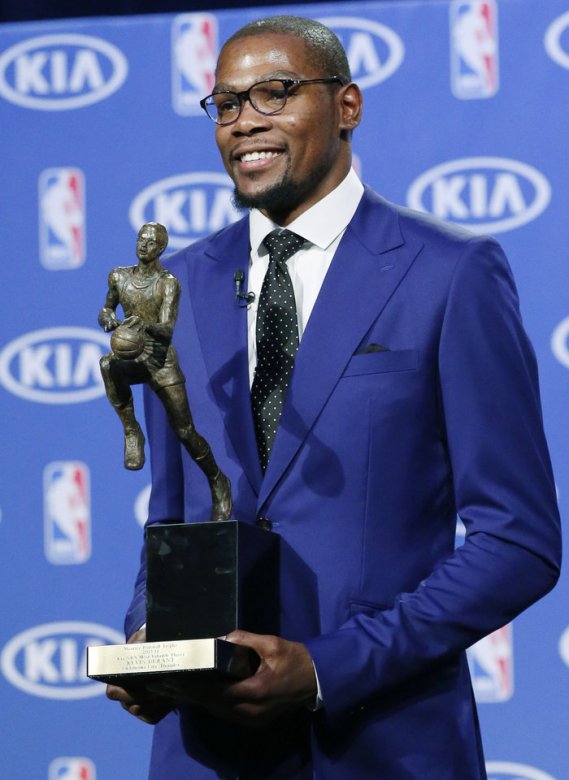 So whether you love KD, respect him after his title or still hate his guts, you will have to watch him raise the NBA MVP trophy in 2018. Hey, at least you will get to see him cry again as he gives another all-time great MVP speech.

One thought on “Whether you Like it or Not: Kevin Durant will be your 2018 NBA MVP”